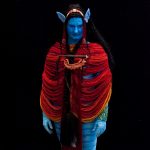 Wolfgang, a dear friend of mine had a great idea for a funny “Avatar-Smurf” skit for the costume contest at FedCon 19, and he was looking for participants. I like his kind of humor, thus I agreed to be part of this fun act and asked some friends to join too. In the end we were a group of six people (Father Abraham, Gargamel/Colonel Quaritch and four smurfs/Na’vi).

We ordered four light blue catsuits with feet, hands, hood and tail. Queeny, a friend of us is an airbrush artist, and she agreed to airbrush our catsuits. After the priming, Queeny airbrushed freehand the zebra-like stripes on the catsuits. The luminescent dots were made with a pearl pen. The tails of our catsuits are wraped with brown velvet ribbon.

I made a loincloth out of a rust colored piece of fabric and antique pink woolen galloon. The feather necklace is made of a self-made cord, big colorful decorated glas beads and different colorful feathers. The herb pouch is made of a self-made cord and dark brown suede with a saurian pattern on. I wear different ready-made wooden bead chains and the half-finished wig of Mo’at with this Na’vi outfit. As accessory I use bow and arrow. The bow is the same bow I also wear with Dúnadan ranger outfit. The arrows are made out of wooden shafts and fletched with “feathers” made of organza with a lime green and  turquoise leopard pattern on.

The thread cape is a present from Sven and is made of about 200 m of woolen threads in all shades of rust red and yellow. The decorative ornaments are made of polymer clay and decorate the front and back tip of the cape..com

The ready-made elf ears were airbrushed and directly sewn to the wig above the natural position of human ears. I braided and twist-braided half of the hair of the wig. A bun of the size of a fist was incorporated into the wig at height of the back of the head to achieve the backcombed look of Mo’at’s hair style. Three wooden bead chains with four straps of wool thread hanging down at the sides were sewn onto the wig. The hanging parts of Mo’at’s head jewelry consists of woolen straps to which the knife with the scabbard, the lower jab bone and the huge perforated bowls is attached.

Two long braids were attached at the back of the wig. They are brought together at bust height and braided down as one braid. We’ve also added small ostrich feathers and an electric fiber optic at the end of the braid to create the gleaming comlink of the Na’vi. 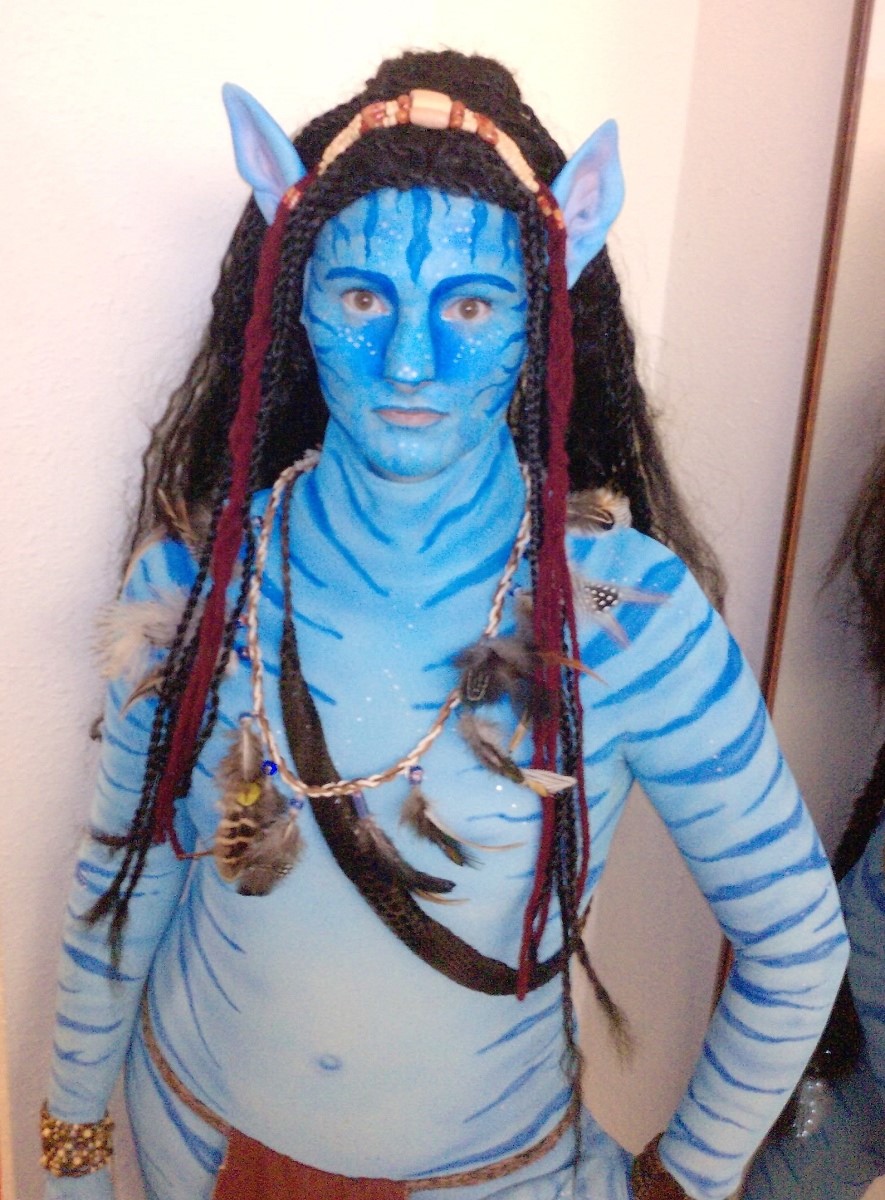 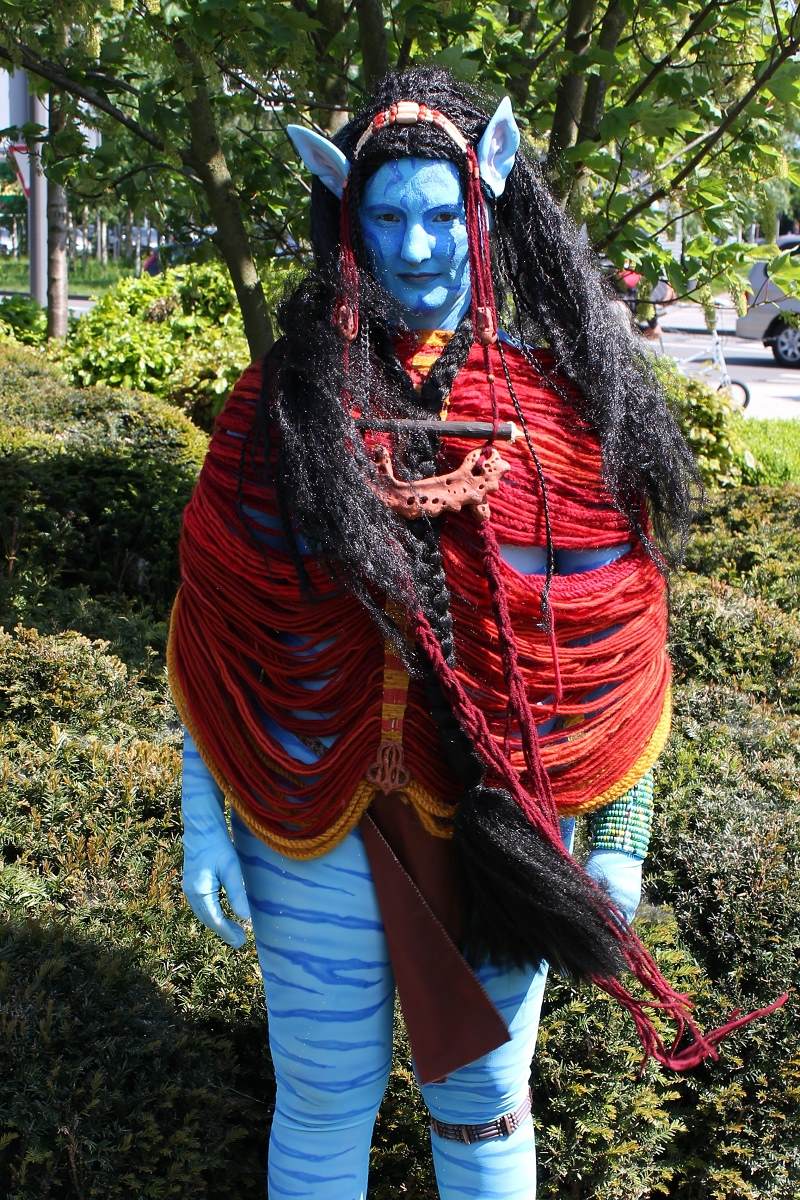 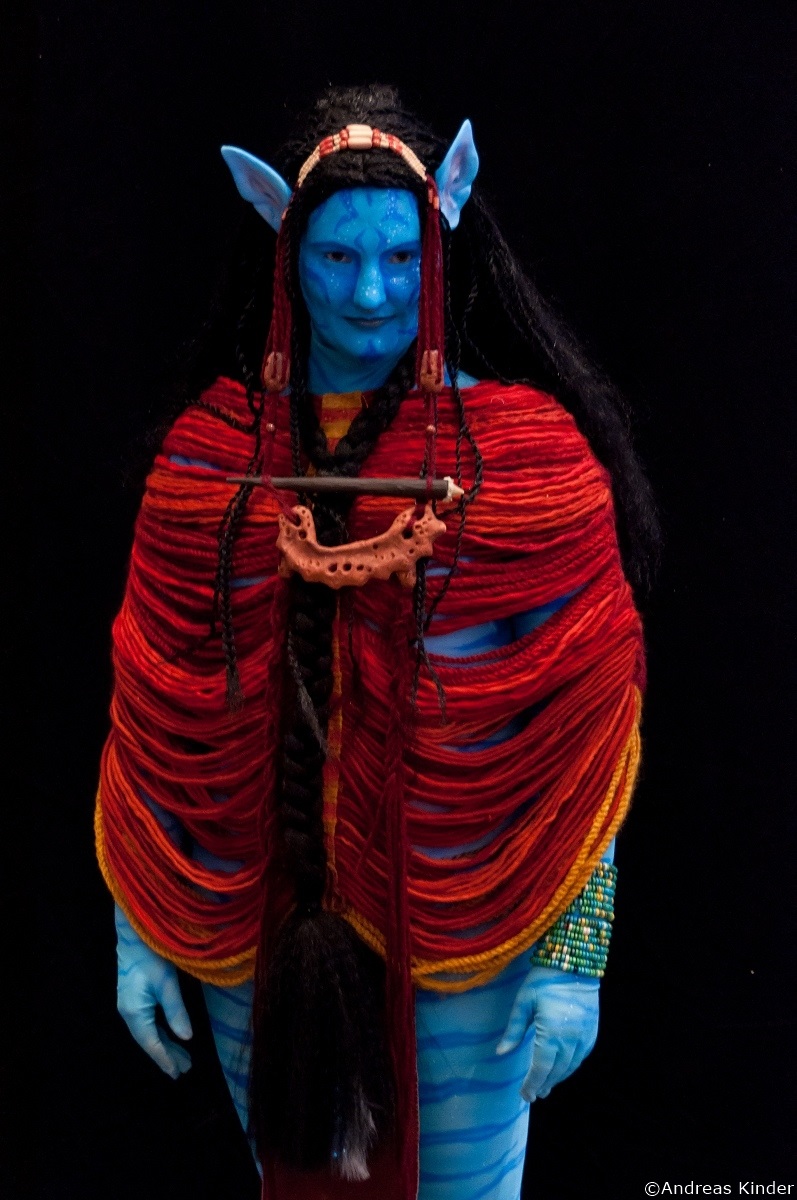 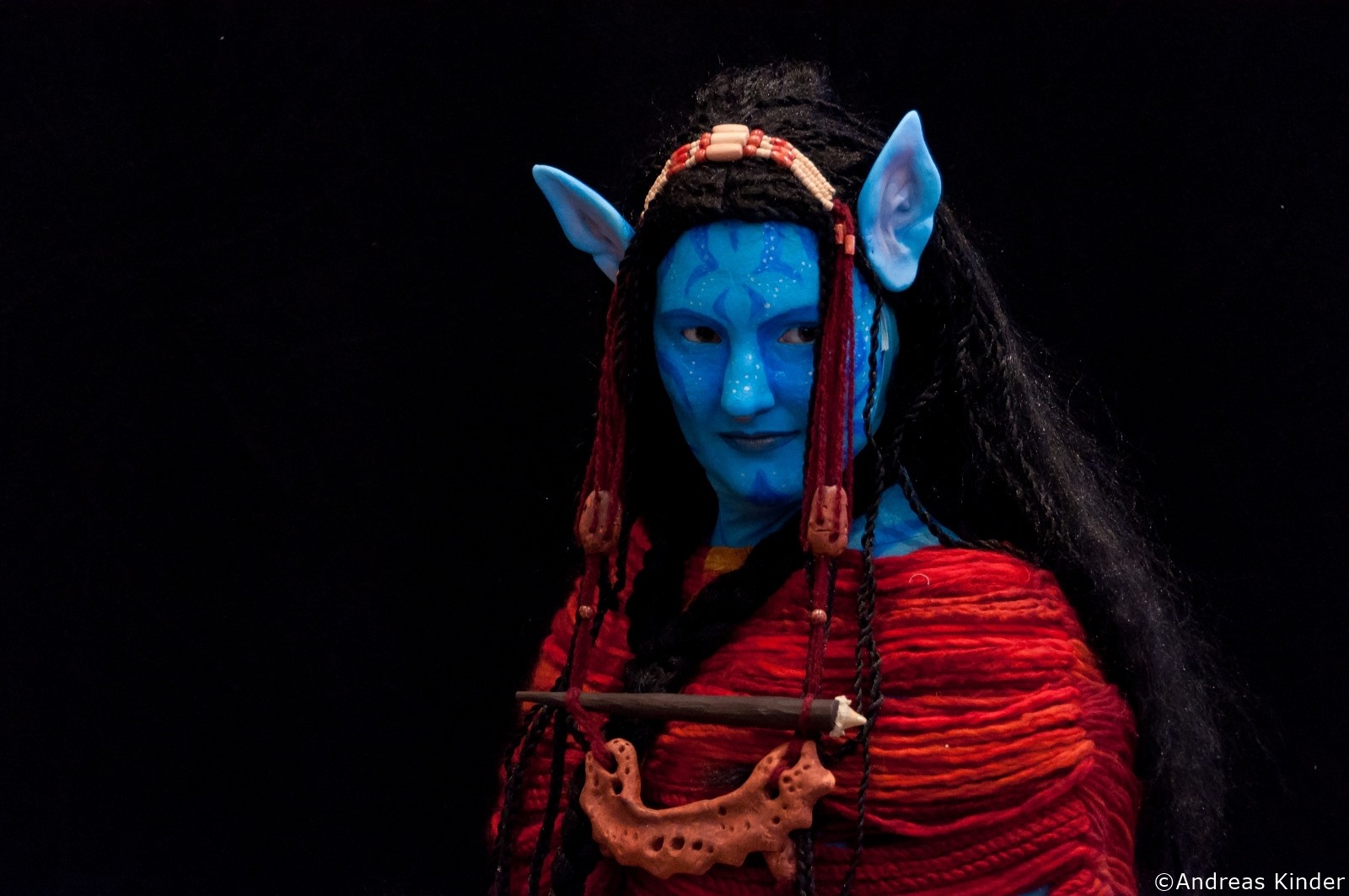 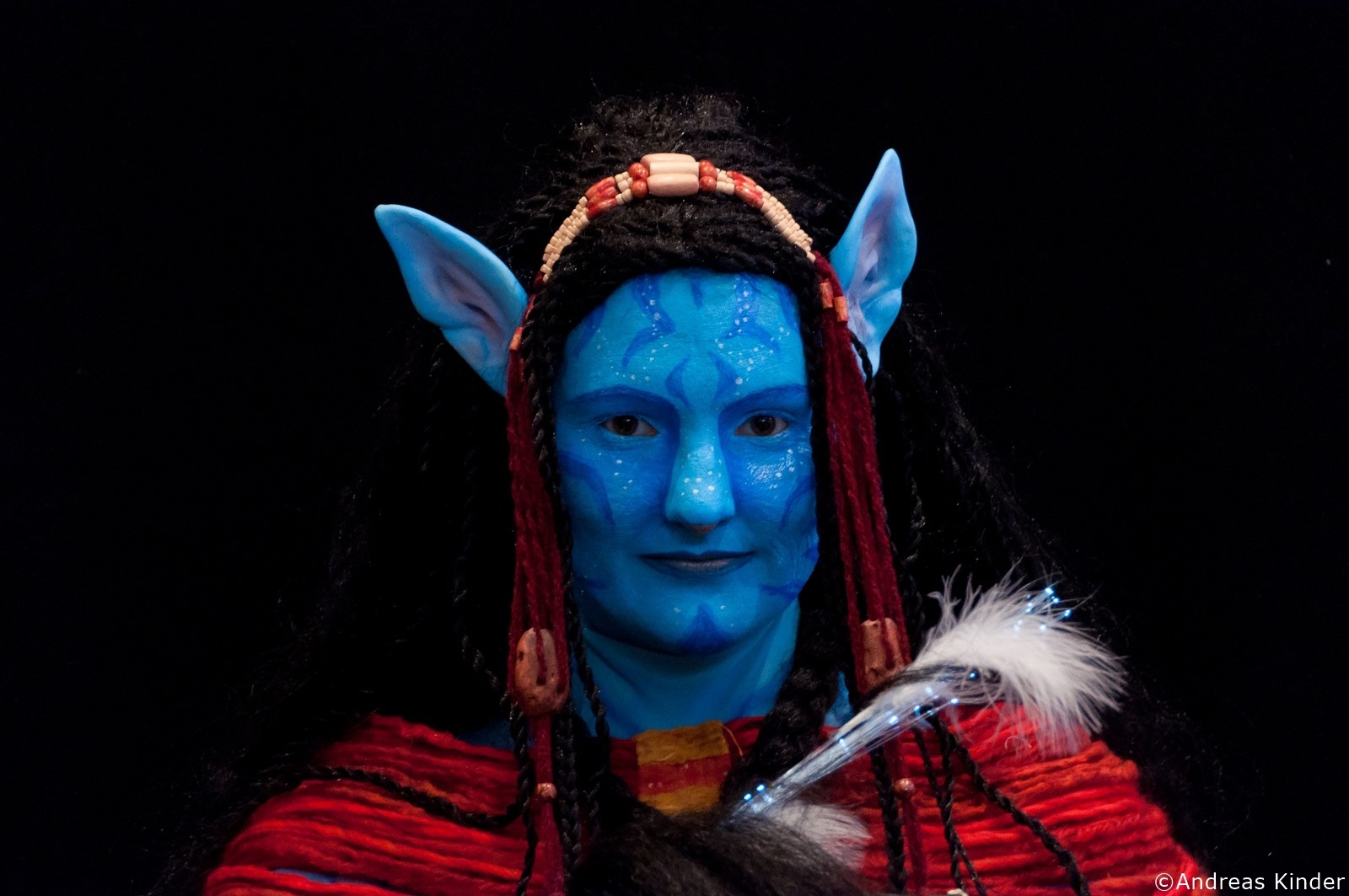 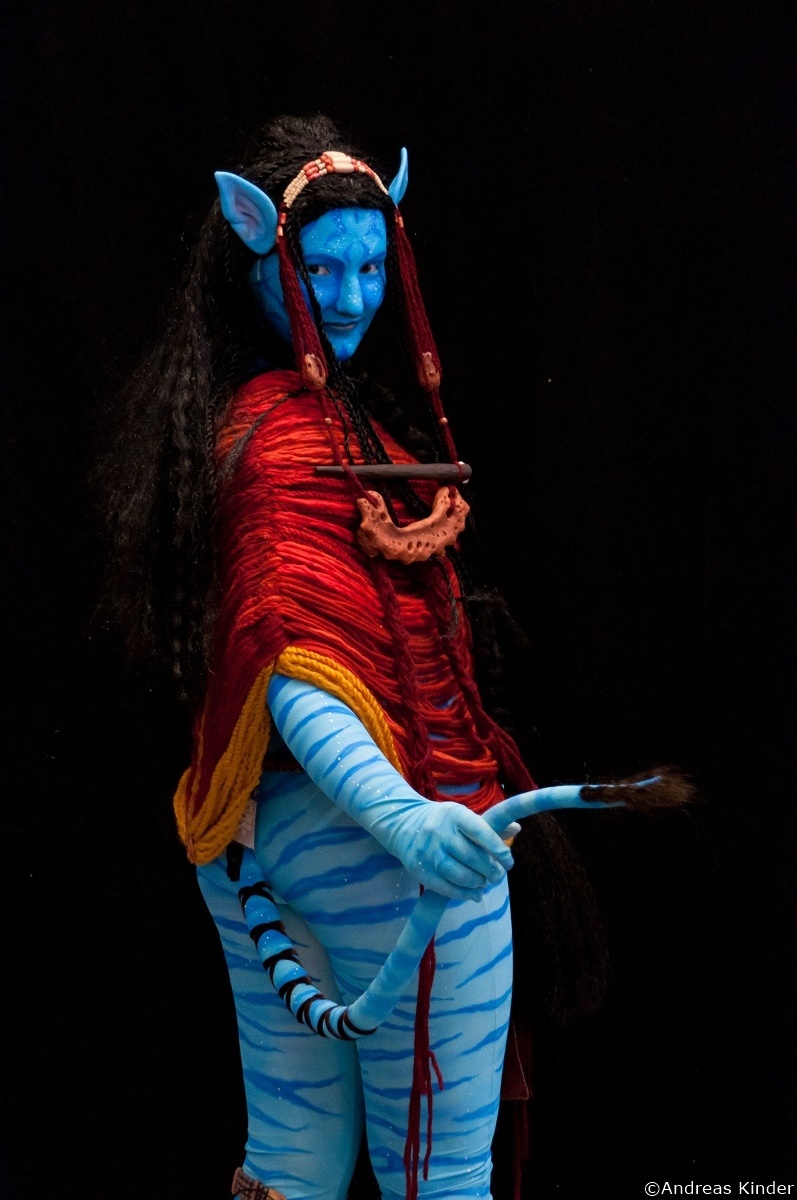 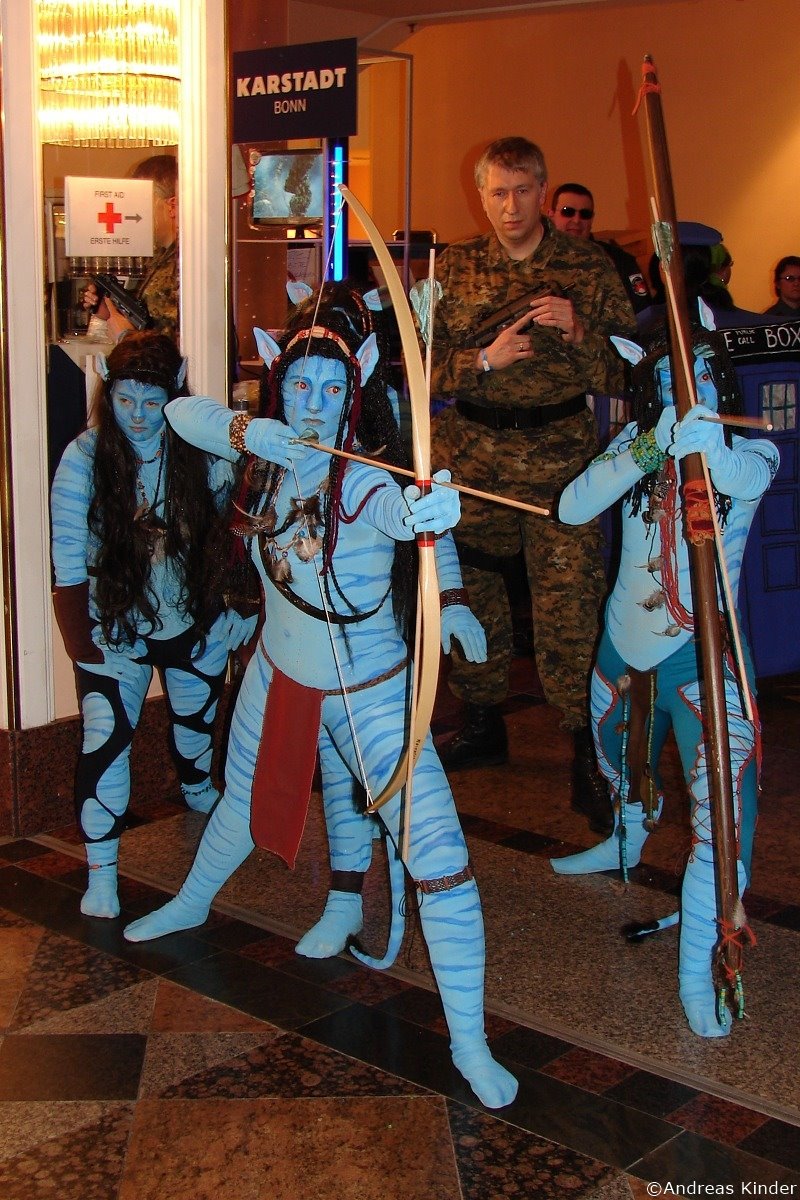 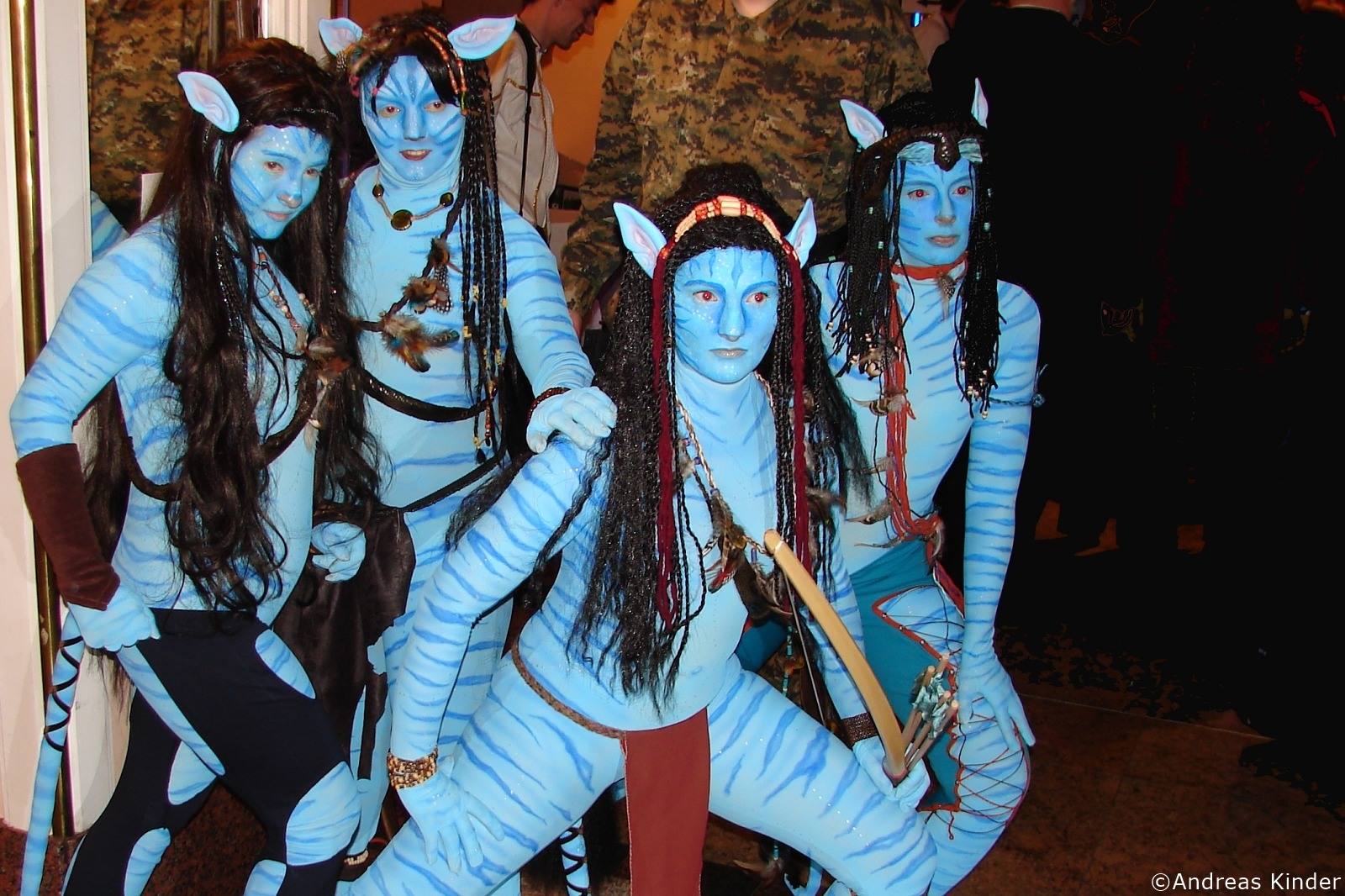 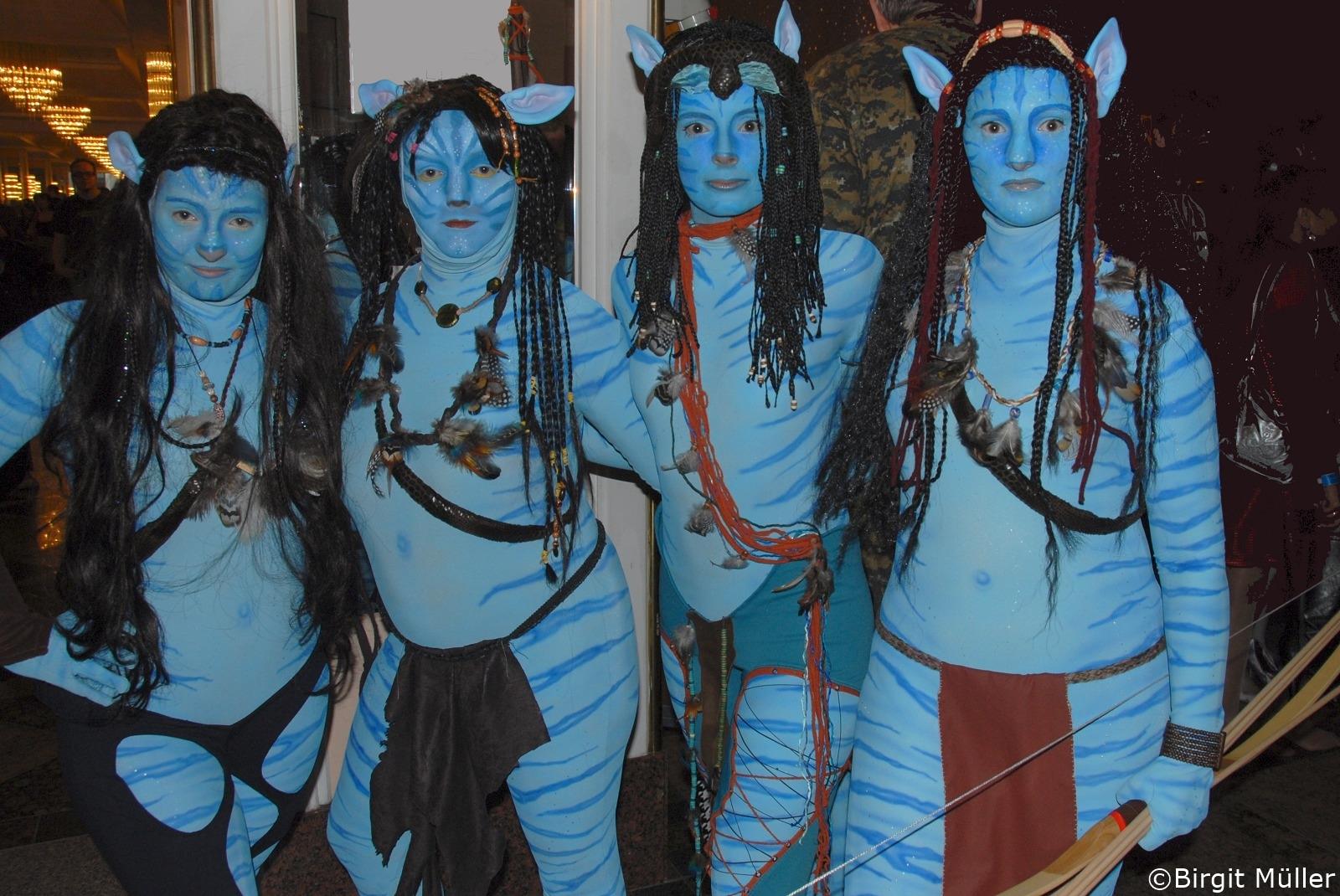 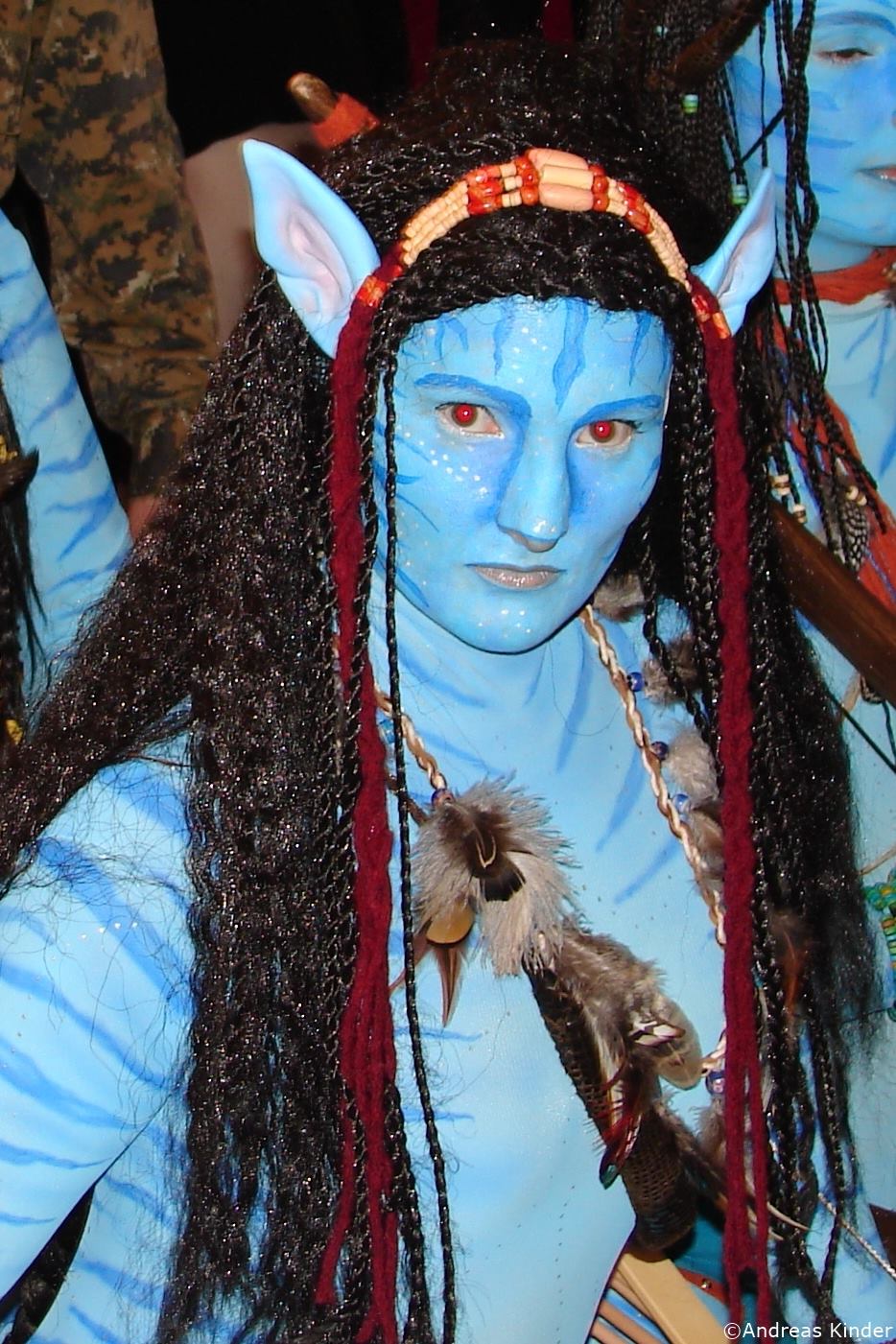 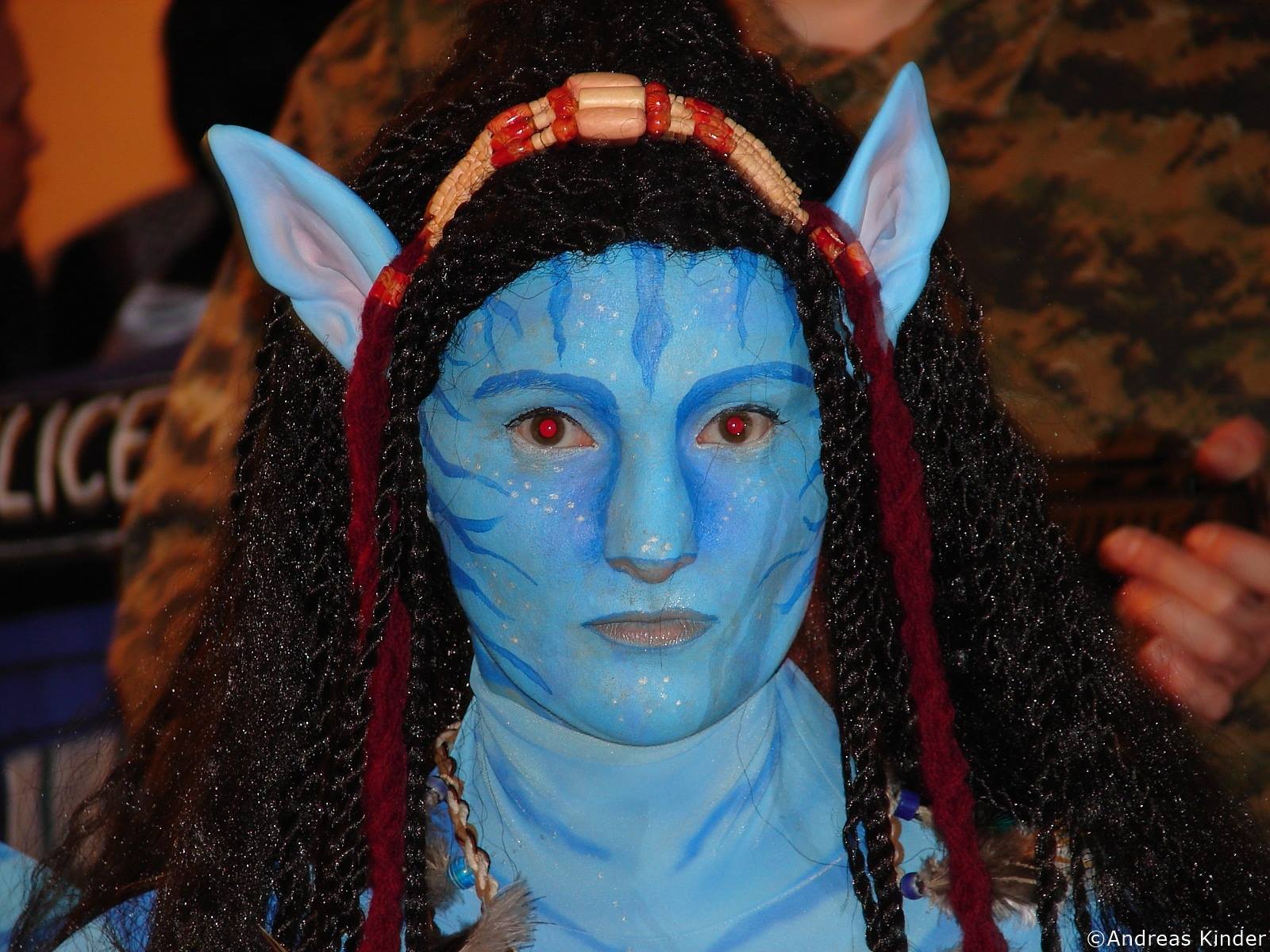 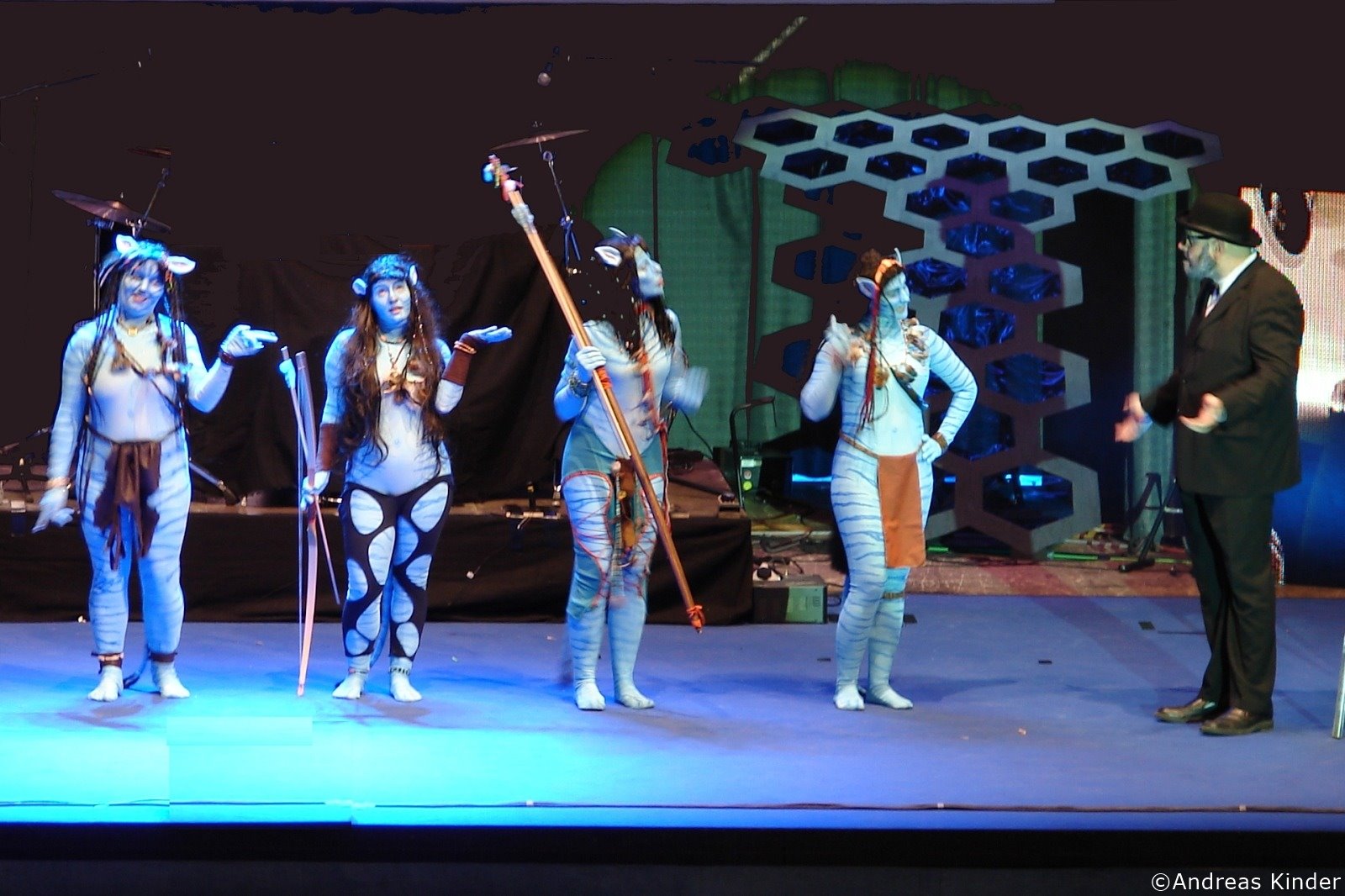 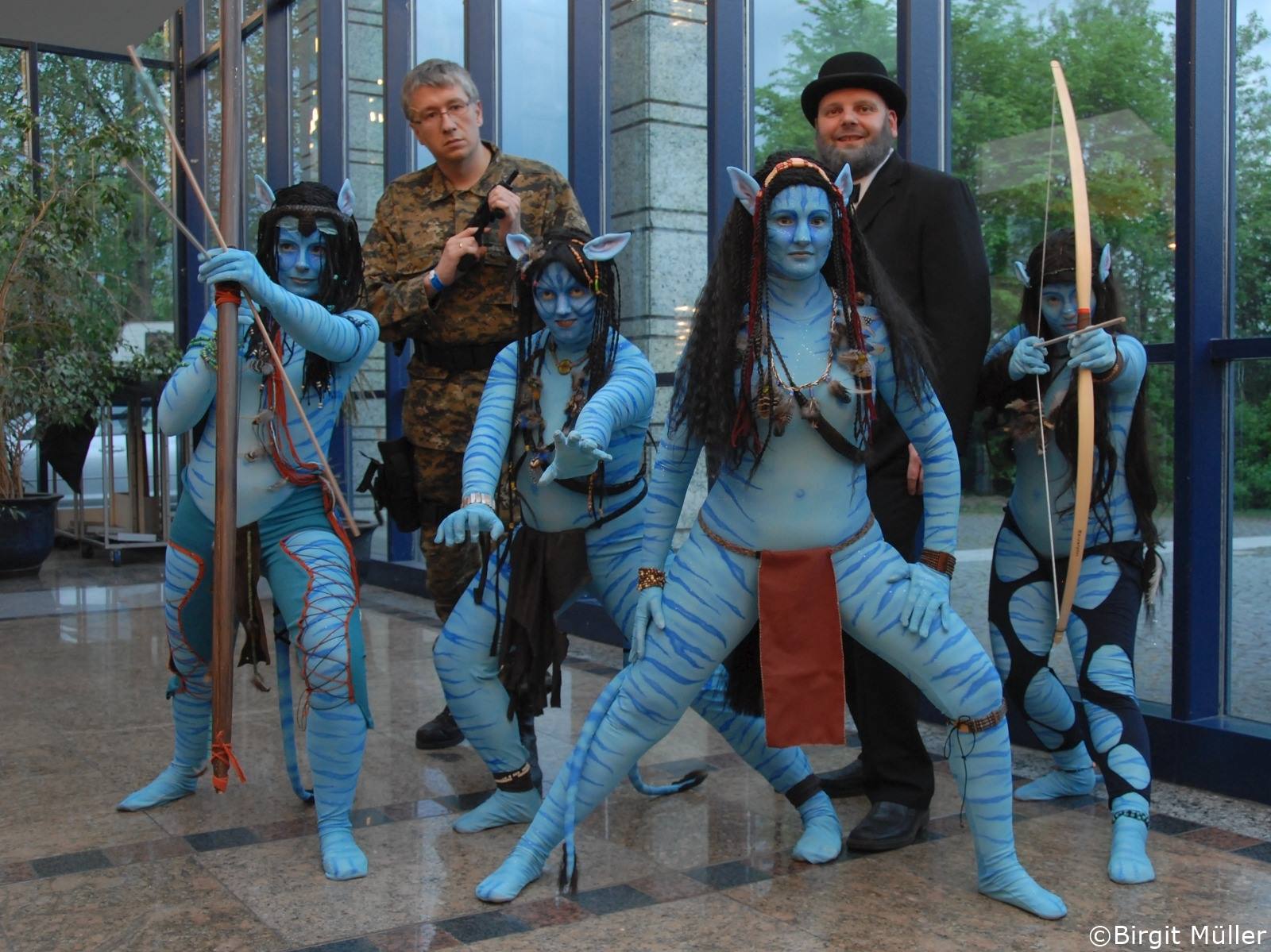 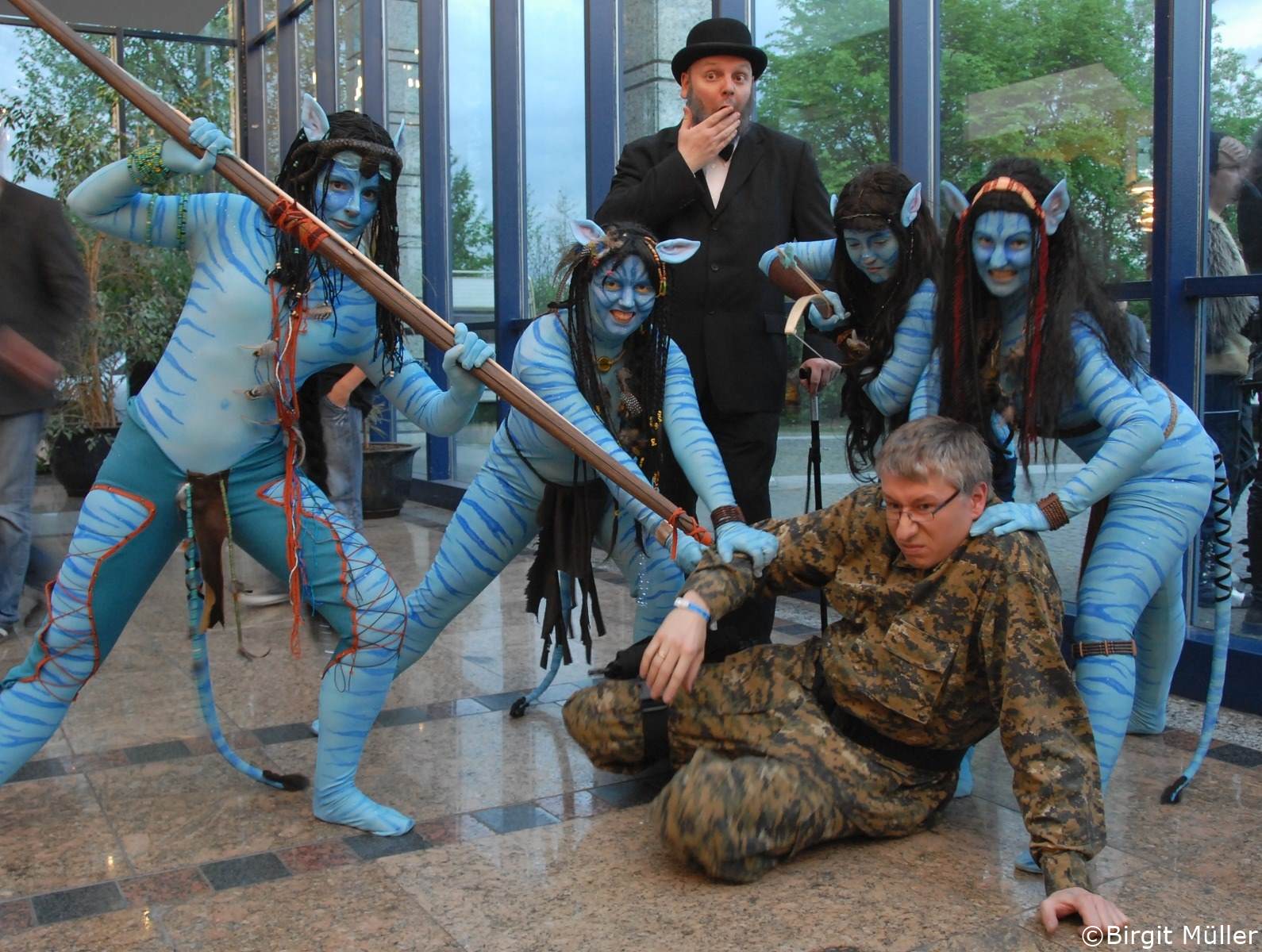 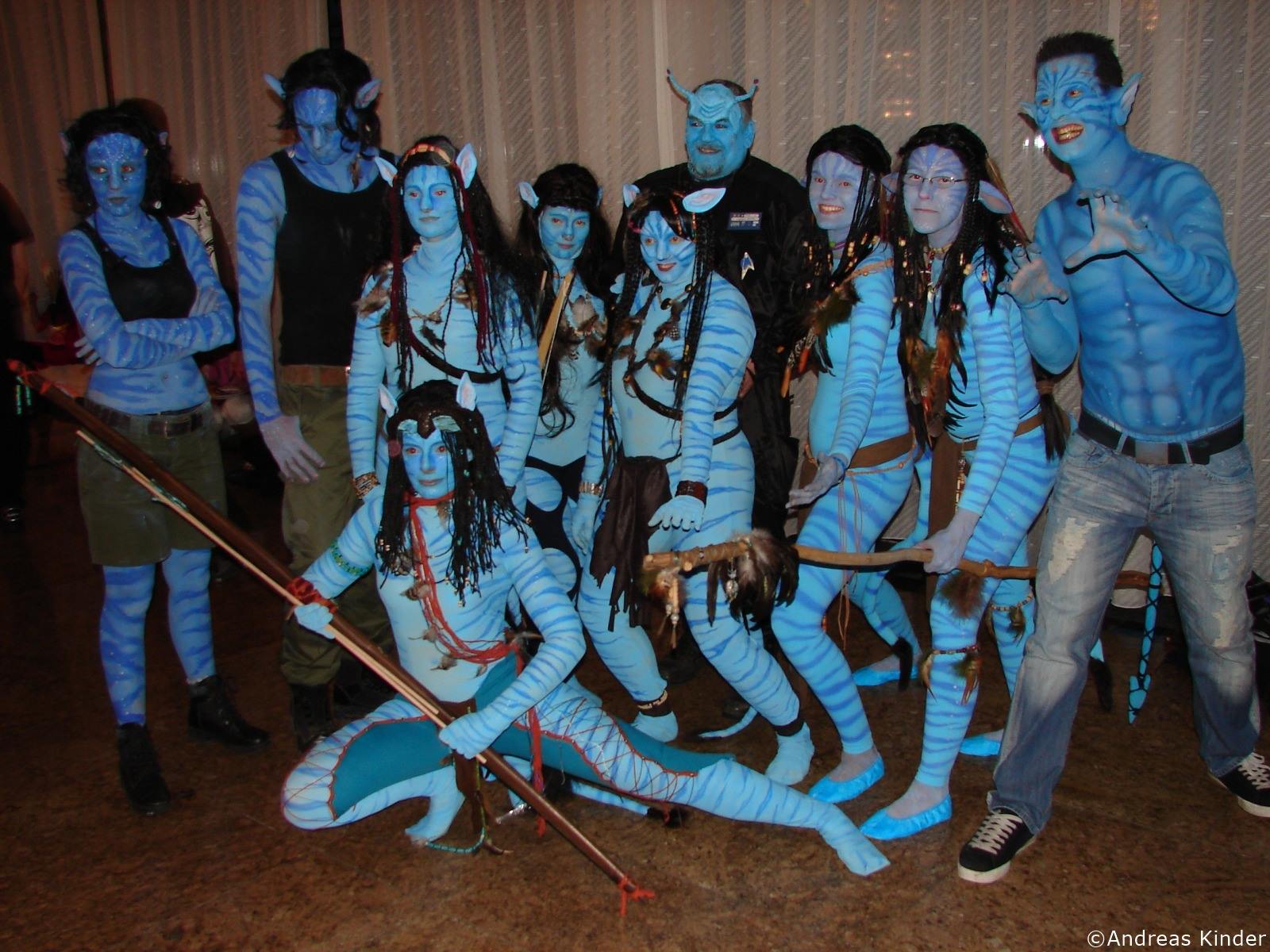